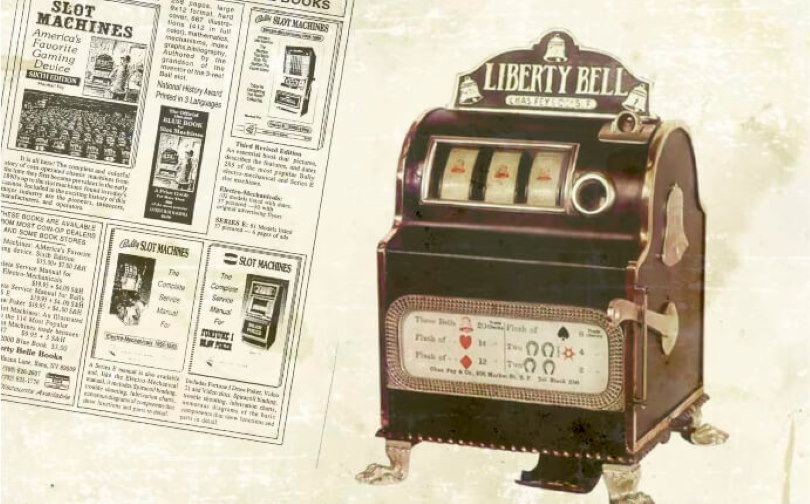 Yes, the Slot machine is older than your great grandfather. It was created by a German immigrant names Charles Fey in 1895. Before 1895, the only gambling that existed in this universe was on the table. The original slot machine was made up of a heavy material cast iron.

You might be surprised to know that the Slot machine in America is called a fruit machine in the UK and a poker machine in Australia. Fey, apart from being the creator, also gets the credit for mass manufacturing them for the first time and selling them to businesses.

Early slot machines became a hit with the less-sophisticated gamblers since it required little more than cash, faith and an ability to pull a lever or push a button.

Liberty Bell, one of the earliest slot machines

In 1915, Iron slot machines were replaced by a wood cabinet slot machine, this first lighter slot machine made the delivery and business easy and significantly made its journey to stardom possible.

In 1907 Fey’s partnership with Mills Novelty Company produced a new row of slot machines, among them his foremost was his three-reel game called the Liberty Bell, considered by many as the father of the Slots. It later gave way for machines specializing in their own mini-themes. These noticeable, livelier machines became an extra treat for players. Soon, after 3 years, th efirst fruit symbol slot machine called the Operator Bell was created by Mills Company.

In 1930’s there was a slot machine boom throughout United States especially in gambling hubs like Atlantic City. More than 50 years after Fey brought this little money-making machine to the world, his imaginative creation was moved with the first electro-mechanical slot machine developed by Bally in 1964. It was called Money Honey.

Internally the machine replaced springs and levers with electrical components. For the players, the change in the outer look improved gaming experience with multiple coin play and bigger jackpots. The electricity used allowed more thrilling slots noises and flashing lights which in turn made it all the more tempting to stay with it for longer periods, even overnight for many.

When the casino business started to grow

Bally manufacturing paved the way in the development of slot machines. In middle of 1970’s a Dollar Slot Machine was introduced which casinos arranged in carousels and significantly bigger jackpots. So far slots had been believed as secondary gambling games for the casinos, with the table games considered primary profit game, as the chance for winning a slot was less.

The 70’s saw this equation changing. That was the beginning of the era when Slot machine revenue for casinos would exceed Table Games and would eventually contribute over 85% of revenues for several leading casinos.

Shortly in 1980, Sircoma shaped a video poker machine, and in the 1990s, brought in slot machines with many additional features like multiple games in one machine, an additional chance to win money away from the spinning reels, Etc.

Later twenty-first century brought most modern slot involving cashless slots with touch screen technology, flat panel display screen, easy to use help menus along with the introduction of tickets or cards onto which cash can be replaced, placing advertisement television screens on the slot machine to cross sell other casinos facilities.

Besides new devices that provide an extra payoff for game-playing dexterity, manufacturers have developed communal games that link clusters of machines – which are proving popular with people fewer than 40. Many of these games are luck based, but proving popular are some skill based bonus games.

Popularity of gambling on the internet brought Software providers with various new great variations in slot-like games having unbelievable bonus features and with great prizes. Many players who never been to real live casinos enters online casinos and gets the true excitement and fun of spinning reels and winning the jackpot.

With projected advance of both online and in live casino, a new class of machines, with skill based games are developed aiming to attract younger players. Coming soon are slot machines with joy sticks, which the industry expects to be particularly popular, and others that will allow users to play against one another, much like they do in many Internet games.

One of the more popular is a slot machine based on the movie Top Gun, created by WMS Gaming, in Waukegan. Online slots however are still in their infancy because online gambling businesses are banned in several countries including the US.

More than century old and looking better with each passing day, Slots will bring thrills for many and money for the fortunate few for the foreseeable future.