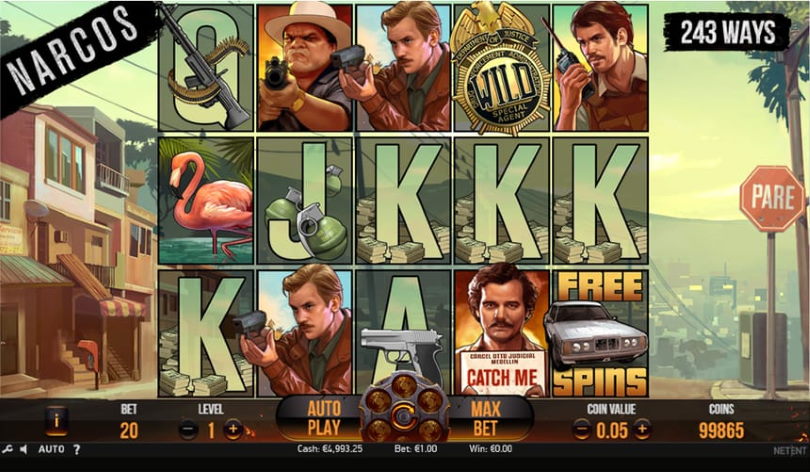 Narcos: A Video Slot Game Based On The Popular TV Series

Narcos is one of the most popular TV series of Netflix. NetEnt developed the Narcos Video Slot game on 23rd of May 2019. The game started winning hearts from the very first day. This game has medium to high volatility with 96.23% Return To Player Rate, which makes it a slot with a high RTP.

Each player can get bonuses and free spins from the game. However, there are no jackpots in the game. Here in the article, we will review the Video Slot game by NetEnt based on one of the most celebrated TV series by Netflix, Narcos.

Released in 2015, Narcos hit the fans around the world hard. So, when NetEnt declared the release of the casino slot game based on the TV series, video slot lovers, gamblers, and TV series fans worldwide rejoiced the version of the game. Breaking the stereotypes of the movie based or TV series-based slot machines, Narcos has a high 96.23% Return To Player rate. The slot is available in a lot of casinos around the world.

Now, here in this article, we will talk about this medium to high volatile Video Slot game and the different aspects of the game available.

First things First, the Wild Symbols of the game:

The Wild symbol of the game is the official DEA badge. This Wild symbol pays out the same as the other high-value symbols. And just like all the other Wild symbols in different video slot games, these symbols can also replace any other symbol except the Scatter symbols and even the locked-up symbols.

If a Wild symbol in this game is a part of a winning combination, it will activate the Walking Wild feature. The logo will remain on the reels. The Wild will stay on the reel; it will move down one space horizontally on the next spins until it completely disappears from the reels.

The Bonus Features of the game:

There are two different bonus features that you can look for. The first one is known as the Drive-By feature. This feature gets activated randomly. A car in this feature pulls up and opens fire indiscriminately at the reels. The symbols that are struck with the bullets get a chance to change into higher value wild symbols.

Another bonus feature is known as the locked Up feature. It is triggered when 3 or more locked up symbols come in the same row. This feature will begin with 3 initial spins. In these spins, only locked up and golden locked up features will appear. The golden symbols can reveal:

If another usual or golden locked up symbol appears during these spins, the player can get 3 more free spins.

3 or more Scatter symbols on reel numbers 1, 3, and 5 can trigger 10 free spins. On each of these spins, one or higher value symbols on the reels will convert into Wilds.

Narcos Video Slot gamesadly does not have a Jackpot feature available unlike many other videoslots with jackpots available.

So, these are the things you needed to know about the game. The game is available at different online casinos. Check it out.